A story made international headlines last week about the ‘Potemkin-style’ facelift currently underway in County Fermanagh, Northern Ireland, in anticipation of the G8 summit in June. Over 100 empty shop fronts in the area have been spruced up and given a special ‘window treatment’ that creates a photorealistic illusion of their being open for business. In one particularly striking example in the town of Belcoo, a 2-D tableau presents warm interiors full of stocked shelves and hanging produce, an idealised echo of the butcher shop that had once operated there. It’s even depicted with its door propped open, as if to invite customers inside. I imagined a government official attempting to enter a fake newsagents for a packet of crisps, and thought what a great photo it would make. Although the irony is surely lost on the planning team, this is a blatant if completely inadvertent mockery of policy (as fellow art historian Janet Tyson observed). 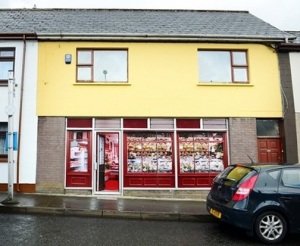 While the initiative has been singled out as a disingenuous gesture on the part of the coalition government (estimated at over £300,000 and initiated by the Foreign Office in London), it isn’t the first time British high streets have been made to appear bustling, whilst underneath many resemble gaping toothless grins. In 2010 a similar effort was made in Tyneside to encourage business, modelling imaginary shops to attract potential entrepreneurs (as if they couldn’t imagine it themselves). The patronising and desperate tone of these stickered store fronts beggars belief. By recreating an image of commerce in happier times (were they ever that happy?), they conversely draw attention their true function – that is, to plaster over embarrassing symptoms of economic decay. By adopting the glossy language of corporate signage they do little to reassure the passer-by. Their warmly lit interiors show us the goods but fail to deliver: the simulacrum is where the buck stops. 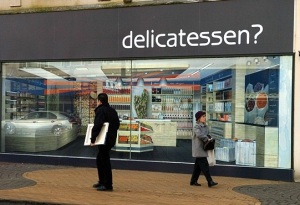 As I pondered over the sad predicament of British high streets (a perennial wound recently reopened with the failure of the Mary Portas scheme), my mind wandered to more interesting and convincing efforts to lift spirits in difficult times. Take, for example, the ‘frontier facades’ that came to characterise pioneer towns in America. The false fronts hinted at a grandness that was to arrive much later, temporarily masking the squat, barn-like structures that lined the main streets. This was an inheritance of the Victorian period, during which a range of architectural solutions were introduced to make the humble appear imposing. These took on took on a sculptural life of their own, and have proved a source of inspiration for artists such as Reece Terris, whose 2010 installation, ‘The Western Front: Another false front’, adopts and subverts the language of colonial architecture.

But while these earlier examples of ‘puffing up’ commerce in the face of austerity measures might appear to us charming, the case of Northern Ireland has evoked anger and shock at the government’s crass, ill conceived initiative. The bottled optimism of the flimsy window stickers falls flat, a cruel slap in the face for the failed business owners who formerly occupied these shops. As if it weren’t bad enough that the conservative government has slashed public spending to ribbons, it’s now using the cuttings to reassemble a myth of progress on the streets of its flagging cities. There is something cheap about the whole endeavour, not least of all because it lacks style. If Cameron wanted to make an impression on world leaders, he should have done it will a bit more flare – maybe even with an ironic nod to historical precedents.

What makes a facade clever, as opposed to just plain condescending? Perhaps it’s down to reflexivity: that it knows itself to be fake; that it can laugh at its own joke. The elegance and ingenuity of a design goes a long way toward its being effective. The last thing the British public needs is a pithy reminder that it was once a booming nation of shopkeepers (a phrase attributed to Adam Smith but famously used by Napoleon to describe Britain’s penchant for retail), rather, it could use a good old fashioned folly to lighten the mood. Instead of instilling a sense of loss for what once was, a successful facade should inspire possibilities. It should be boldly ambitious and wildly imaginative, even if it is propped up against tough odds and empty promises. Its delusions, at the very least, should be grand.