The exhibition, ‘Headless Body found in Topless Bar’, was held in June in the shared studio of Leeds Weirdo Club, and featured a single work by each of its three members, Matthew Crawley, Harry Meadley and David Steans (curated by Meadley). It provided a window onto their respective works-in-practice, which were fittingly framed by the artists’ bookshelves, work surfaces and meticulously arranged grid of hanging tools. Crawley’s contribution was a full-scale replica of a Leeds ‘Poster Drum’, the name given to the 100+ promotional monuments that are dotted throughout the city. Standing 325 cm (10’6”) high by 138.5 cm (4’5”) wide, Temple took up most of the basement workspace at Patrick Studios (also headquarters of East Street Arts). The work dominated with its formidable scale, while its surfaces – smoothly sanded and painted a matte stone grey – seemed to absorb the atmosphere around it. Towering like a monolith or obelisk, it appeared oversized and cramped in the space, acting as a playful and strangely magnetic obstruction during the preview.

Temple is a facsimile of the 1994 version of the poster drums, which are co-managed by the company Street Sites and Leeds City Council. By way of invoking of this earlier model the work might be considered as a folly (those who have been following my blog will have noticed that my definition of ‘folly’ is very flexible!), as it represents an attempt to bring the recent past into the present. Crawley’s choice to replicate an older version of the drums is interesting, for it highlights the fact that they have a history in the city, the slight adjustments to their appearance a reflection of different stages in their evolution. It shares with its urban counterpart its light grey colour and the twin gold stripes that run along the edge of the upper octagonal rim, or turret. Upon four of these surfaces the company’s name and telephone number are printed in white. In the context of the artist-studio-turned-exhibition-space, this information serves only an aesthetic or conceptual purpose. Through this, and its conspicuous lack of posters, Temple can be understood as a non-functioning object, or architectural sham. 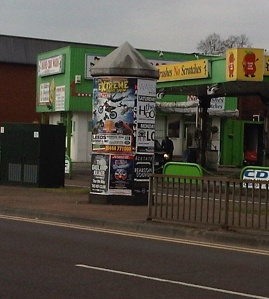 Most Leodites will pass by a number of very similar structures every day, but the blank, monochrome surfaces of Temple delay recognition. Here is the absence of a thick accumulated skin of posters that typically cover the drums’ tall midsections, which signpost a steady flow of music gigs, concerts, operas, festivals, exhibitions and other events in and around Leeds. The omission of this advert-pastiche is key, for instead of deflecting the viewer’s attention through so many beams of promotional information, the smooth surfaces draw it inwards, towards the object, which all the time lies below these competing layers of signification. This gives the work a kind of gravitational pull that supersedes and cancels out its commercial function. Moreover, in contrast to the permanent installations in the city, Temple is temporary, its ungainly dimensions requiring it to be rebuilt each time it is shown. Crawley sees this as an essential part the work, explaining that following de-installation the piece is ‘destroyed and less than a ruin’. It is also site-specific, as different exhibition spaces require adjustments and changes to the design: in this case its pyramid roof was clipped to fit the height of the studio ceiling.

Another distinguishing feature of Temple is that it is painstakingly constructed by hand using wood, an inversion of the pre-fab, steel drums found on the streets of Leeds. While its measurements are reproduced with careful precision and its edges seamlessly finished, there is something about the work that gives away its handcrafted origins; it possesses a certain quality that manufactured objects lack. The flat, even coating of paint further works to unify its volumes and surfaces, emancipating the drum from its commercial fetters and elevating it to the status of art (and/or architectural) object.

I am always struck by the artist’s ability to lift ordinary and ubiquitous objects to a realm of contemplation, and to encourage an appreciation, or even admiration, of form. Rather ironically, it is the absence of the loud and busy imagery of promotional materials that make the shape and volume of Crawley’s drum so eye-catching.

Temple is a quotidian object captured and transformed, which seems to almost hum with its own resonance. Its clean, unadorned faces soothe our over-saturated senses, offering a reprieve from the countless adverts and flyers that we encounter on our day-to-day journeys. And yet Crawley’s work doesn’t let us forget the template and inspiration for Temple. The multisided structure was designed to project messages on behalf of paying venues and companies; it is a monument to civic marketing, and nothing more. The power of Crawley’s Temple, I think, is that it urges us to take notice of these urban monuments; to encounter them with a new set of references and an apprehension of their form.